Thanks to Mitzi Ware at New Dominion Books in Charlottesville for taking a second look at American Luthier and reaching out several weeks after I thought an opportunity had died on the vine. And a world of thanks to Jefferson scholar and new friend Cinder Stanton, retired Shannon Senior Historian at Monticello, also of Charlottesville, whose work Those Who Labor for My Happiness about daily life at Monticello provided the focus and foundation for the group biography The Hemingses: An American Family, by Annette Gordon-Reed, winner of the 2008 National Book Award for Nonfiction and the 2009 Pulitzer Prize–and fourteen other awards.   Gordon-Reed’s newest book, Most Blessed of Patriarchs: Thomas Jefferson and the Empire of the Imagination, co-authored with Peter S. Onuf, was just released in April.

Gordon-Reed was a featured speaker at the 2016 BIO Conference held June 3-5 in Richmond, VA, when the Biographers International Organization hosted a conversation between two Pulitzer-Prize-winning biographers.  I  took great delight in listening to a conversation between Annette Gordon-Reed and T.J. Stiles, who has won two Pulitzer Prizes–The First Tycoon:  The Epic Life pf Cornelius Vanderbilt (2010); and Custer’s Trials: A Life on the Frontier of a New America (2016).   Upon determining that since I was to meet Cinder Stanton in person, I should like to bring her the newest Jefferson book by Gordon-Reed, I innocently walked up to the book table at the conference when Gordon-Reed was signing her new Jefferson book.  When I asked if she knew Cinder Stanton, Gordon-Reed smiled broadly and opened her book to the dedication page:  “For Lucia (Cinder) Stanton”!!!! I don’t suppose that such serendipitous convergence of an author, a new book and the person to whom it is dedicated will ever occur again in just that way–but the memory of the moment will stay with me for a lifetime! 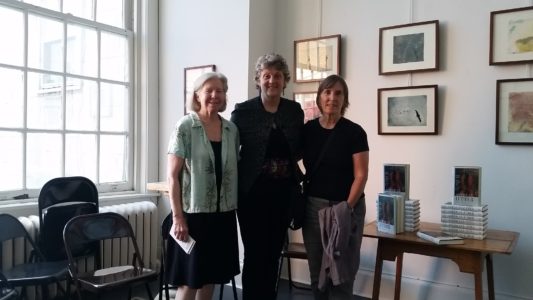 Serendipity is extra special when it is coupled with random kindness.   Among the many hats that Cinder wore in Charlottesville, she also worked as a classical radio station DJ for two decades–and so worked out an unexpected opportunity for me and American Luthier  by garnering the interest of local WTJU Radio Station host Francesca Da Rimini who allowed Cinder to interview me on the radio in connection with the book event happening at New Dominion Books that evening.

To hear this radio interview, go to http://soundcloud.com/wtju/book-interview-most-influential-violinmaker-since-stradivari.  THANK YOU, Mitzi. THANK YOU, Cinder!