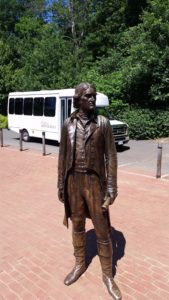 Thanks to my hostess–celebrated Jeffersonian scholar Cinder Stanton–I was lucky enough to not only tour Monticello, but to venture beyond the ribbons that protect the house from too many visitors to venture up the first steep set of stairs to see the second floor, and then one more stairwell to see the top floor of Monticello!  A real treat–not soon to be forgotten!  Upon first learning of my upcoming visit and of the subject of American Luthier, Cinder had asked about whether I knew about Jefferson’s fiddles?

Jefferson studied violin at an early age and continued his passion for the instrument into old age.   In fact, documentation shows that he wooed his sweetheart with music in his courtship of Martha Skelton. The story goes that on one particular morning Jefferson had already greeted Martha when two rival suitors presented themselves on Mrs. Skelton’s “door-stone.” As they were shown into a waiting room and overheard the harpsichord and voice of Martha, accompanied by the violin and voice of Jefferson rendering a touching song, the two suitors promptly took their hats and retired, never to return again! Jefferson and Martha Skelton married on January 1, 1772.

Documents show that Jefferson owned at least three violins–including a “kit” or a dancing master’s pocket fiddle purchased in Paris in 1786. His prize violin, although its maker is uncertain, is said by some scholars to have been Italian, crafted in the Cremonese tradition, possibly attributed to the school of Nicolo Amati which would have made it valuable indeed.  Family lore claimed that this violin was nearly destroyed in the Shadwell fired of 1770, but for the quick thinking of a faithful slave, indicative that the instrument was perhaps of great value and worth saving.
The second violin is referenced in letters that indicate John Randolph, Jefferson’s cousin, of Williamsburg, acquired a violin that Jefferson coveted. The two made an agreement about the violin. The bargain stated that Jefferson would receive the violin upon Randolph’s death, while Randolph, upon Jefferson’s demise, would receive 100  pounds of Jefferson’s books! But when Randolph departed for England in 1775, he dissolved the agreement and delivered the violin to Jefferson.

While there is some debate about how proficient a performer Jefferson was, his catalogue of works by 1783 suggest that Jefferson was not only knowledgeable but more than proficient. The works include concertos, sonatas, operas, duets from composers Corelli, Vivaldi, Handel, Pugnani, Boccherini–works requiring advanced bowing and left-hand technqiues. In addition, Jefferson’s copy of Geminiani’s celebrated technique book The Art of Playing on the Violin is meticulously annotated in Jefferson’s hand, another indication that he must have been at the very least a gifted and talented amateur and possibly a fairly advanced player.

Music was important to Jefferson all of his life.   He not only insisted that his daughters and granddaughters learn and practice music, and to that end secured an Italian music tutor, he himself devoted thousands of hours to the violin. According to Jefferson himself, he “played no less than three hours a day” over a span of at least a dozen years, amounting to 13, 140 hours of practice, suggesting that Jefferson demonstrated more than “gentlemanly proficiency.”  The real mystery is that there is so little record of what happened to his favorite violins upon his death. No records exist that detail their fate.  Upon his death in 1826, most of Jefferson’s belongings were auctioned to pay his huge debt.  Nicolas Trist sent the two violins from Monticello to Joseph Coolidge in Boston where a celebrated performer would examine them. At this point, the two violins were without strings and had broken bridges but Coolidge reported these problems “of little consequence.” In October 1828, the violins were taken to England by a friend of Coolidge who hoped to “get 100 to 150 guineas for the Cremona in London.” There, the trail disappears–the violins were never recovered.  Though, as is often the case in the violin world, many candidates for the missing violins have been presented, no conclusive documentation has yet to be made.  Perhaps one day, the Jefferson fiddles will finally come home to Monticello!!!!!!  For further information, see Violins / Thomas Jefferson’s Monticello by Claudia Elzey. See https://www.monticello.org/site/research-and-collections/violins