First Mountaintop Newspaper: Among the Clouds

Storm-bound atop Mount Washington during the summer of 1874, Henry Burt surveyed the cog railway, the carriage road, the first-rate hotel, post office and telegraph office, and remarked, “There ought to be a newspaper here for those who have to wait for the clouds to lift.”

In the July 18, 1877, first edition, postdated July 20, Burt wrote of his passion for the mountains in his opening editorial: “We never feel so near the Infinite as when looking up these lofty mountains and the thousand beauties that are limited only by human vision.” When Burt discovered visitors wanted a paper to announce their summit visits, he began printing two daily editions of Among the Clouds to coincide with the noon and evening arrivals of trains and stagecoaches. Mountain reporters covering the coaching parades in the 1890s caught the last train to the summit, writing their stories as they traveled up the mountain.

Snow or sleet, rain or shine, the newspapers were printed, folded by hand and bundled in time for a three o’clock departure, when railway men with bundles between their knees would climb aboard slide boards, sleds fitted to the cog railway nicknamed “Devil’s Shingles.” These “paper trains” arrived at the base of the mountain in ten minutes. A wagon pulled by swift horses would deliver the papers to Bethlehem or to the first train going through Crawford Notch, reaching readers before breakfast, thereby “scooping” all the city newspapers. 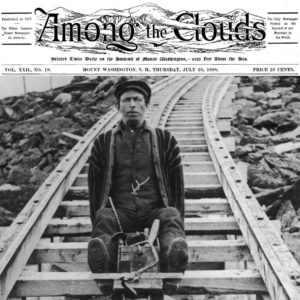