Frost was born in San Francisco, California, to Robert Lee Frost, a journalist, and Isabelle Moodie, a teacher. In 1885, when his father died of tuberculosis, to honor his father’s wishes to be buried where he was born, his mother took a train with Robert and his sister Jeanie to Lawrence, Massachusetts. They relocated there, as Frost’s paternal grandfather William Prescott Frost would make sure his grandson had good schooling.

At his death on January 29, 1963, Frost had become so popular, it might be argued that he had become a kind of unofficial national poet laureate. Perhaps he was such an exquisite poet because he reveled in contradiction—in nature, in mankind, in life itself at its most mundane and joyous—but also maybe because he was an enigma, too. In his 1999 biography, Jay Parini wrote of Frost:

He was a loner who liked company; a poet of isolation who sought a mass audience; a rebel who sought to fit in. Although a family man to the core, he frequently felt alienated from his wife and children and withdrew into reveries. While preferring to stay at home, he traveled more than any poet of his generation to give lectures and readings, even though he remained terrified of public speaking to the end. 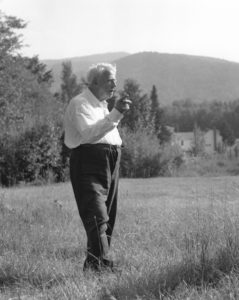