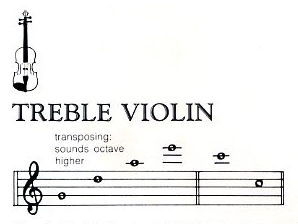 The Treble Violin, tuned G-D-A-E, an octave above the violin, is the smallest and highest member of the OCTET. In England it is called the Sopranino following the nomen datum of the recorder family. Its dimensions are approximately those of a quarter-size violin, but in construction it is quite different. In order to achieve the transposed violin sound, the Treble not only has extremely thick top and black plates, but extra large f-holes and strategically placed small holes in the shallow ribs so that its main resonances occur at the desired frequencies. Michael Praetorius projected an instrument in this tone range, but without the high E-string, so that in effect there were only three strings. Since the string length must be at least long enough for a player to finger consecutive semitones securely, the E string (tuned to 1320Hz) must be extremely strong and thin. A space-age material known as carbon rocket wire, with a tensile strength nearly twice that of the normal violin E string wire, is used for this purpose. Even so, this wire is close to the breaking point. No wonder Praetorius omitted it in his tuning of high treble!

The tone quality of the Treble violin provides an effortless brilliance on its two upper strings which can soar above the string choir, much like the piccolo cutting though the sound of a full symphony orchestra. The two lower strings have a mature sound that can be exploited in combination with other instruments of the OCTET. Performers have found that the individual timbre and short string length of the Treble Violin make possible a tremolo on intervals of up to an octave on any one string, and double stops of up to a twelfth on any two strings. Owing to its small size, it can be played equally well under the chin or, rebec style, on the arm; giant leaps are possible with a little practice, accomplished through a small movement of the wrist. Many pieces from the conventional violin literature can be played with considerable facility on the Treble, sounding an octave higher.

The Treble Violin is included in many of the compositions written specifically for the OCTET; one use is to add clarity and brilliance to the ensemble, especially by playing on its upper strings in combination with the Soprano Violin. Several solo pieces have also been composed for the Treble. 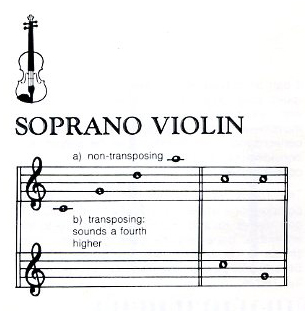 The Soprano Violin or Descant, as it is called in England, is tuned an octave above the viola, C-G-D-A. It is a 20th-century version of the violin piccolo of the 16th and 17th centuries in the same tuning, known mainly through works written for it by J.S. Bach. Two such works are the cantata “Wachet auf” and the first Brandenburg Concerto. In the latter the Soprano Violin has been used with considerable success playing the part usually performed today on an oboe. As the highest member of several string quartets, composed for the Soprano, Mezzo, Alto, and Tenor Violins, the Soprano adds brilliance and roundness to the upper register. The sounds of such a quartet have been characterized as “the music of the gods”.

In size and string length, the Soprano is comparable to a three-quarter violin, though it is somewhat broader in outline, with shallower ribs to keep its Helmholtz air resonance high enough to be at the desired frequency. 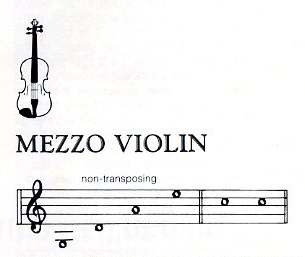 The Mezzo Violin is an enlarged version of the conventional 14” (35.5cm) violin, having a body length of 15” (38.2cm), but maintaining the standard nut-to-bridge string length. During the early history of the string family, makers such as Stradivari and Maggini also produced large violins; thus, this idea is not new. With top and back plate areas considerably larger than in the normal violin, the Mexxo produces more power, particularly on its lower strings. In order to maintain the Helmholtz resonance up near the open D string, the ribs are about half the height of those in the conventional violin.

The Mezzo is used today by concert artists and orchestral players who find its extra power and wide dynamic range a distinct advantage, particularly in combinations with piano or wind instruments. 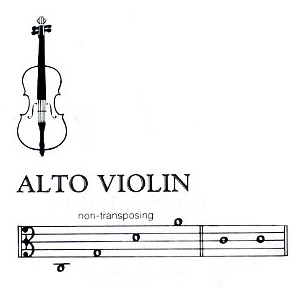 The Alto Violin is essentially an enlarged viola, and like the viola is tuned C-G-D-A. The Alto is similar in size to the early so-called tenors made by Stradivari and the Amatis. Its body length of 20” (50.8cm) poses a definite problem when played under the chin, although several professional violinists do play the Alto this way in solo and orchestra work. Others play it in cello fashion, on a long peg, giving the performer the advantage of greater facility in the upper positions where thumb technique can be used. In response to musicians requests, the string length has been adjusted to 16 3/4 “ (42.4cm) to facilitate viola fingering. The additional clarity and power, and the full dynamic range of the Alto throughout its entire compass caused Leopold Stokowski to say: “That is the sound I have always wanted from the violas in my orchestra. No viola has ever sounded like that before—it fills the whole hall.” Violist William Berman has, with great satisfaction played an Alto exclusively for the last eight years in solo recitals, orchestras, and string quartets. 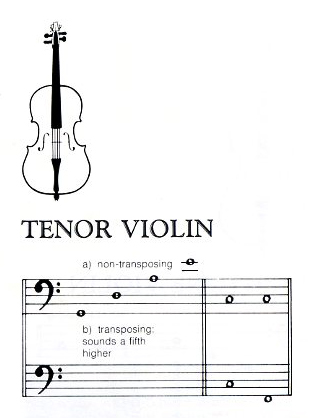 The Tenor Violin, tuned G-D-A-E an octave below the normal violin, is similar in size and playing technique to a three-quarter cello, but has shallower ribs, giving it the appearance of an enlarged violin. The Tenor actually is an enlarged violin, with singing clarity and brilliance an octave lower, and with tone colors not heretofore available in this range. It not only fills the gap between the conventional viola and cello, but makes available new sounds, suitable for solos as well as ensemble performance with other strings or wind instruments and the human voice. Lowell Creitz, formerly cellist of the Pro Arte Quartet, has conducted research into the so-called “lose tenor,” examining several hundred instruments which could have been originally in this tone range. He plays a 17th century Grancino tenor as well as one of the new ones, and finds quite similar characteristics.

Many early compositions for the old tenor apparently still remain to be unearthed from archives. A number of modern compositions have been especially composed and arranged for the new Tenor Violin. 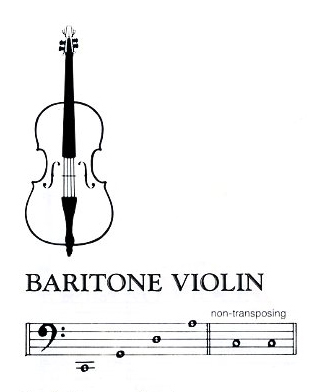 The Baritone Violin, tuned C-G-D-A like the cello, has nearly comparable string length but larger body dimensions. It is reminiscent of the large cellos of the 15th and 16th centuries, many of which have been cur down (particularly those of Montagnana and Maggini).

Since the Baritone’s resonances are placed lower relative to string tuning than those of the cello, the tones on its two lower strings are unusually clear and powerful. However it’s a string resonances are not more powerful than its lower tones, as is true in the normal cello.

According to several concert cellists, the Baritone has all the power of a cello but possesses greater clarity and a larger tone on its two lower strings—features particularly noticeable when playing pizzicato.  The Baritone not only blends well with the other members of the OCTET, but in the symphony orchestra it can enhance the sound of the entire cello section. Several cellists are using the Baritone in sonata recitals where is balances well with the piano, particularly in its lower range. One professional cellist commented: “This is the first time I have been able to talk back to the piano in a Brahms sonata.” 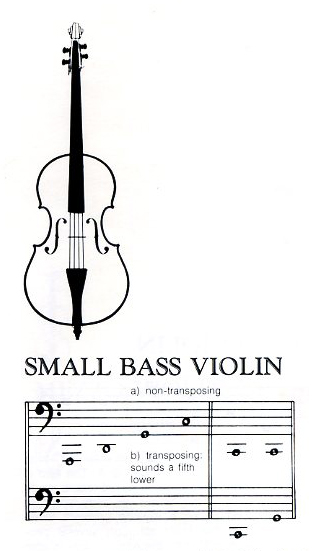 The Small Bass Violin is tunes A-D-G-C, a fourth above the conventional orchestral bass violin (double bass). It is about the size of a three-quarter bass, with similar string length but with the rounded shoulders and swelled back of the violin family. Plate resonances are tuned by methods similar to those used in violin, viola, and cello construction; consequently, its tones are clear and responsive throughout its compass. Bass players have found that the Small Bass responds easily, and has great resonance, with an exceptionally fine pizzicato. They like its ability to blend in ensemble playing but are particularly eager to explore the possibilities of the Small Bass as a solo instrument. 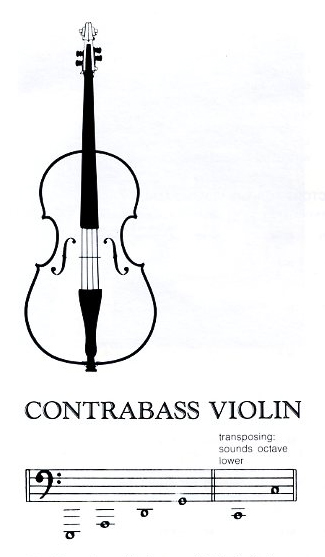 The Contrabass Violin, tuned E-A-D-G, is even larger than its conventional counterpart, the double bass; it has a body length of 51” (130cm) but a string length of only 43” (110cm)—well within conventional measure. Its impressive size, the tuning of the plates, and its comparatively light construction cause the lower notes to produce organ-type sonorities. The violin shape of the upper bouts, as well as its overall size, make the Contrabass Violin less practical for playing in high positions. It is, however, magnificently suited for bass parts which do not require the player to reach beyond the 3rd or 4th position. Its rich, saturated bass tones can supply a solid “bottom cushion” to the sound of any symphony orchestra.